If you’re not the best driver, then the TaylorMade M2 irons will help you out with damage control. They are truly forgiving irons that allow almost any player to improve their game.

When I first received the TaylorMade M2, I was a little skeptical about how good they would be, since I had allegiance to another brand. Surprisingly, I was pleased to see my driving average go up about 5-10 meters.

Normally I only go for dedicated golfing brands and try to stay away from any brand that also makes sneakers (TaylorMade is owned by Adidas), but my love for TaylorMade started when I tested the last M2 model. I decided to take the plunge, as quite a number of my friends had recommended the M2, and when I started to play with them, I realized that they stood out amongst others.

The first talking point was their appearance – they look great! My previous iron looked good too, but the TaylorMade M2 Irons have a very nice-looking tip; it seems every time they update them they just seem to look even better.

When I made my first swing, I was ecstatic. It was smooth, and the clubs felt great to use with very little vibration. My first shot was an excellent one but I put that down to luck and continued to test the clubs out. I lost counts of the number of times I could have hit better (I’m a little rusty) but using them was thrilling.

With the M2, you tend to have more drives that are always at an optimal distance, even if hit poorly. The TaylorMade M2 also has an added a speed pocket that is three times higher than the previous model, which equates to a significant increase in distance.

Driving distance and forgiveness have been improved thanks to the new TM design method - Geoacoustic Technology. This gives room for the sunken sole to release volume without increasing the center of gravity. 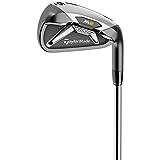 I found out after testing the TaylorMade M2 Irons for while that these clubs really improved my game. I was eventually shooting so much better than I ever had before, and even managed so to beat my very experienced friend for the first time!

These clubs will definitely help intermediate or beginner players who strive to improve how they play. I would really recommend them for professionals too, and maybe people who have been playing casually for a while, because they are an excellent choice that really took me by surprise.

The Best Men’s Spikeless Golf Shoes: Which One Is Your Favorite?