It’s never easy upgrading something that’s already almost perfect. But Ping G30 driver defied all odds by improving one of the bestselling drivers on the market.

The Ping G series has been around for over a decade now, and the G30 is the most advanced model yet. The main goal of this line of drivers has always been to offer golfers better forgiveness and maximum distance. This is still the objective, but it is fair to say that the G30 looks nothing like its predecessors.

This new Ping  driver was the 7th incarnation of the G driver series after the great Ping G25. With a combination control, distance, and forgiveness, the Ping G25 created quite a stir and appealed to many golf enthusiasts for quite some time. But it was the G30 that created the most hype.

The Ping G30 driver was officially unveiled at the Hyundai Tournament of Champions in 2016 with  .

One of the biggest visual change of the G30 is at the top of the driver. The original turbulators are expanded and have a crown with a dragonfly-like design. This biomimicry inspiration was not only for visual appeal, but also for performance.

This unique design allowed the manufacturers to remove over 8 grams from the crown and reposition the center of gravity at a lower in the driver. This increased forgiveness and reduced spins. The design also improved the club’s aerodynamics to cut drag and increases the club’s head speed for better distances, making it an ideal choice for a variety of swings.

The turbulators also help in alignment by drawing your eyes to the back of the golf ball. This means that the G30 doesn’t come with a central alignment aid.

With a strong titanium in the face, the designers were able to make the driver thinner and move the saved weight to the head for increased stability. Apart from the saved weight, the thin walls also improved the sound and optimized the center of gravity.

With a lower center of gravity, the motion of inert (MOI) significantly increases and in turn reduces the impact of off-center hits. With less gear effect, more energy is transferred to get the ball, hence, you get more distance and less twists at impact. In addition, you don’t have to play as much loft, so you get more smash factor and speed.

Also, new to the G30 is the T9S Face material. When compared to the materials used by its predecessors, the T9S titanium is lighter and stronger. The driver also uses the latest Trajectory Tuning Plus Technology which makes the hosel adjustable to offer users more flexibility and performance.

The TFC 419D technology on the shaft creates a balance point closer to the grip end of the club. This also contributes to the high MOI and low center of gravity of the club which enhances the forgiveness, low spin, and high launch.

However, some users may prefer a smaller club head. But this is entirely based on preference and an individual’s gameplay. 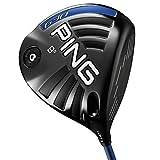 To know just how advanced the Ping G30 is, it’ll be best if you compare it with its most immediate predecessor – the Ping G25.

Ping took a driver that was already top-quality and made it more adjustable, faster, and more forgiving without compromising on the already awesome features. It was an “improvement of an improvement”.

From the fresh new turbulator looks, traditional matte crown and TFC 419D shaft to the neat blue accent, reliable alignment and satisfying sound, the Ping G30 is perfect. In fact, when you think of it, it has no shortcomings. This is a must-have tool if you truly love your game of golf.