The most important equipment in golf is the club. Skill and technique play a big role. Thus there's no doubt a good club will help add speed to your swing and distance to your shots. Let's find out in this Callaway XR Driver review if this is the right one for you.

There are thousands of models to choose from, but few come with the reliability and power of Callaway XR Driver.

Here's Our Full Reviews Of The Callaway XR Driver 2018 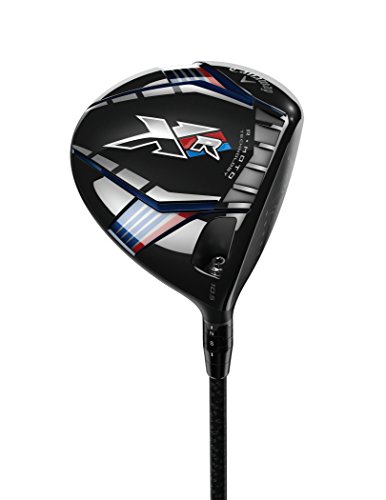 This driver by Callaway is one of the most advanced and brings a range of exciting features. In this Callaway XR Driver review we will break down the different parts of the club to show what makes it so special.

A Faster Swing for Better Power

The biggest reason to choose the Callaway XR Driver is because of its numerous features. Though there are several impressive upgrades built into the club, one of the most important is its emphasis on speed.

The model is the fastest titanium driver ever designed, which works to maximize both club and ball speed. Not only that, but it is equipped with a speed step crown design that works to create a faster head and reduce drag.

Those traits are all important when it comes to enhancing speed, but they would not be as beneficial without the XR Driver's special R-MOTO Face technology. This feature reduces face weight by 10 percent to create even more ball speed.

R-MOTO also lowers the center of gravity by 17 percent, a key feature that generates a much higher moment of inertia.

All of the above features give you a quicker swing to help you achieve the distance that you want. However, the XR Driver does not stop there.

The club also has a specially designed Speed Step Crown, as well as an optimized aerodynamic head shape. Both of these work together to allow your driver to move faster through the air. Moreover, the head increases speed, while the step holds air close to the crown to allow for a more efficient swing.

The model also is equipped with a Project X LZ shaft that produces maximum load during the downswing loading zone to generate large amounts of energy transfer to the ball. You can also look for other shaft options for no extra cost.

The XR Driver's Mix of Distance and Accuracy

There is no doubt, as covered in this Callaway XR Driver review, that the club is fast. As a result, the club can knock the ball incredibly long distances and gives you the ability to hit much further than you would with other models.

That increased performance is mostly tied to the club's reduced drag, which amps up the head speed and enables you to swing much for much greater distances.

While some people may worry that the increased power sacrifices accuracy, you do not have to worry with the XR Driver. This club enables you to have a good amount of control over your shots without losing any power. Accuracy is always going to shift based on a golfer's skill, but it doesn't hurt to have a bit of extra help.

Another extremely important aspect in choosing a club is its feel.

Feel is key to making sure your equipment works with your style of game, and the XR Driver is perfect for any type of player or style.

Not only does it feel amazing in your hands, but the club offers a great mix of balance, weight, and sound that all come together to generate an amazing experience with E1 wedge.

In addition to the feel, the club also had a slightly tacky grip to perfectly complement its incredible balance. That feature is then enhanced by the club's amazing sound, which reverberates nicely off the club. Even on shorter hits, the noise rings out as if there is a lot of power throughout the swing.

As helpful as the above traits are, the Callaway has a few final features that help it shine. The first is its OptiFit technology, which allows the golfer to use 8 different loft and lie configurations to get the exact lift they want. Also, the club has a modern, stealthy aesthetic.

It always helps when a club enhances your game, but it is even better when that club can help you and look good at the same time. This model is crafted with an all-black face and crown to make everything come together in a unique way.

There are no distracting logos or stripes here.

The above Callaway XR Driver review shows why this club is so special.

Not only does it look and sound great, but it has every advanced feature you need to increase your swing and distance.

There are many parts to becoming a better golfer, and this club helps with them all.